Since 2009, the Robotics Club has been growing, getting more diverse, and taking on new building challenges. 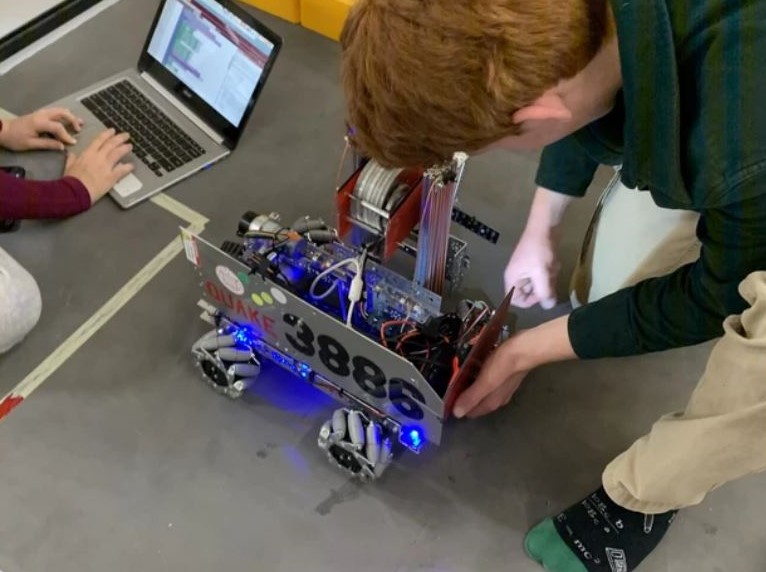 Under Freshman Hall, there’s a place that’s noisy and crowded every Friday after school. There, in the Makerspace, students gather to explore the world of robotics.

The Friends Robotics Club, established in 2009, is arguably one of the most interesting clubs in the school. Even though robotics can sound intimidating to some people, everyone is welcome to join, regardless of ability or experience.

“I think people who’ve been in the club for a year or more love to see new students coming in,” says math teacher David Heath, who has coached the team for 10 years.

Robotics and engineering, in general, have always been infamously male-dominated fields. But the Friends Robotics Club is making strides to change that culture. Jimena Guallar-Blasco has been the team’s captain for the past two years after joining the club as a freshman.

“I think it’s a huge issue that there are so few girls,” Jimena says.

Jimena says she wishes more girls felt confident about trying robotics. “The fact that the girls have this internalized doubt in their own ability in technology really concerns me and the school hasn’t been addressing this issue,” Jimena said.

Recently, more girls have shown up to robotics practice, and the club is excited to see bigger turnouts in the future.

Mr. Heath says it is also important that there is no grade bias existent on the team as he strongly encourages freshmen to join.

Ryan Ellis ‘22 joined the team as a freshman in 2018. He blended in quickly and contributed many great ideas in his first season.

“I just really love getting to come in and do something and get hands-on with parts and then have them go together and do something cool,” he says. Ryan adds that he likes creating something that isn’t tied to grades, but is instead for “your own enjoyment.”

This year, Ryan returned to the robotics team as a builder.

“The freshmen can get ahead and work very well and be very important to the team,” he says. Ryan recommends to “Just start to come really early and show some dedication to it.”

In the club, students have a chance to plan, design and make a whole robot by themselves.

“I think it is the closest thing close to engineering that high school students can get,” says Mr. Heath.

Students spend their time building robots to prepare for the FTC competition. FTC, or First Technology Challenge, is a competition that launched in 2004, and has since become one of the largest high school robotics events around the world. To join the competition, each team has to build their own robot, compete, and cooperate in a field with other teams around the state, country, or world.

Every year in early September, FTC’s theme is announced. From that point on, the team has 3 to 5 months to come up with a robot to send to the competition.

The Friends school robotics team, nicknamed “Quake,” has participated in the FTC and won multiple honors over the past 10 years. These included the right to compete at the state level four times, and being a member of the winning alliance – a group of teams that join forces at that event.

To build their robot, students can aluminum alloy parts as the main structure builder. There are a limited amount of motors on each robot and the size is limited too. Students use tools and machines in the Maker Space to bring their design ideas to fruition.

This year, after two and a half months of preparation, the “Quake,” joined the first FTC qualifying match on December 7th.

There was a lot of suspense surrounding how we would do because we made a risky design with wheels that weren’t perpendicular. Instead, they were arranged like a tilted trapezoid. They seemed fine in our tests at school, but we weren’t sure.

We also didn’t know what the competition would be like either. This is the first time in Friends history that we attended a competition so early in the year with so little time to practice. We didn’t test the robot thoroughly.

After traveling for two and a half hours, the team arrived to compete against 15 other teams at King’s Christian Academy near Saint Mary’s City, Maryland. The other teams prepared more than we had expected.

After a grueling 11 hours, we wound up ranking 14th out of 16. Even though the result wasn’t ideal, we were proud of how the team worked together closely and cooperatively.