Back to (Zoom) school, and on to hybrid 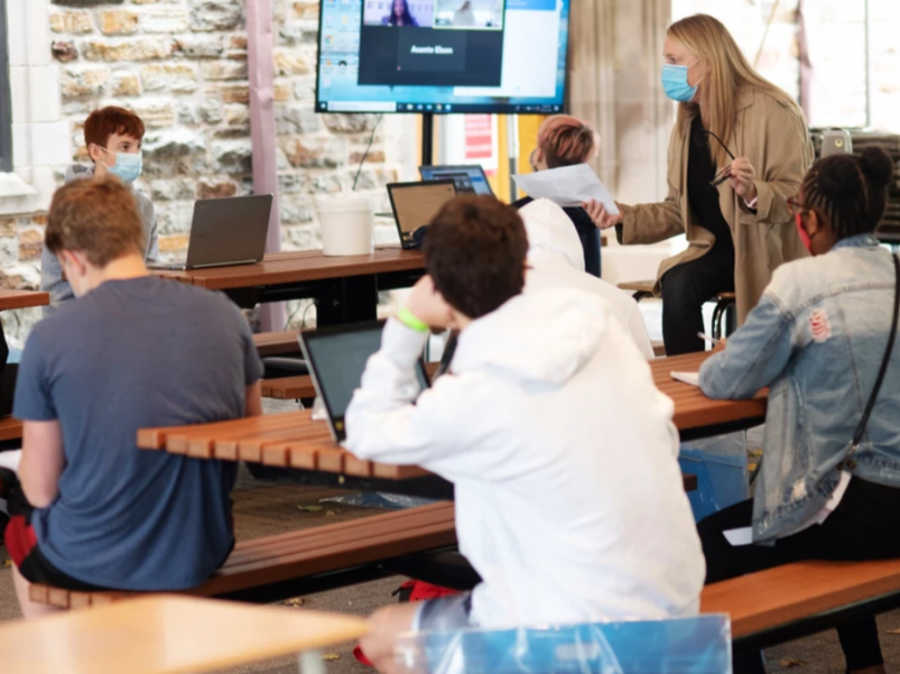 In November 2020, students joined Christine Saudek’s ninth grade English class both in-person and over Zoom, under one of the tents Friends purchased to make hybrid learning possible.

So basically we’ve been on Spring Break for seven months now. I guess everything has been the same for so long, it’s all a blur to me. I’m sitting at home, doing school work. Bored out of my mind. Sometimes the quarantine has even been too much even for me. Yes, that’s right, the quarantine was too much for me. At first it was fine; it was fine for longer than it was for most people, probably. But now it’s all taking a toll.   – Matthew Mizrachi, 12th grade

After reading how school would operate for in-person hybrid learning, I was not excited. PPPs, no frees, and six feet distance from everyone? It sounded awful. But I wanted any piece of school and human interaction I could get, so I made my way to school on the first day of hybrid. Turns out, it was fun! At M-block that day, I played soccer with about five friends in front of the middle school for an hour. It was a beautiful day and I remember being so glad I was back at school with my friends. Since then, in-person school days have gotten less and less enjoyable as the weather has been cloudy and gross, but I’m still glad to be back.   – Anna Wallengren, 11th grade

My first day of hybrid school, I walked up to the Upper School office and was met with a 30-person line. From the back I could hear Mr. Ball shouting: “Make sure you have signed the safety form and have it ready when you come inside.” Eventually I made it inside, and I was met with a device I had never seen before. It was explained to me that this camera could take your temperature. This was and brand new concept to me, and I was very impressed.   – Zach Buchalter, 12th grade

The first class I had in person was Journalism with Ms. Wiltenburg. It had gone terribly. I had forgotten everything at home, the Zoom she was speaking over was glitchy, and I couldn’t really hear a thing. It was awkward at first, all of us craning to hear. Then Sophie scolded me about how I hadn’t done the homework for my next class, and Sophia laughed, and I really didn’t care. I don’t like being six feet apart from people I love dearly, but it was so nice to see them in person that I smiled, sucked it up, and went back to trying to figure out what Ms. Wiltenburg was saying.   – Sophie Bauman, 12th grade

In the first week of hybrid History class, we went out in front of the Middle School and got into a circle, and Mr. Carlin asked us what pet we would want if we could have any animal. When it got to the last person, he was holding a praying mantis in his hand, and he said, “I would want a praying mantis,” and everyone laughed. It’s moments like these that we almost never had during online learning.   – Sam Wu, 9th grade

One of my first classes back was Math, and it was a complete mess. Mr. Bonn wasn’t there in person, and the tent was too loud to hear anything he was saying unless we were huddled together by the speaker, going against the social distancing rules. We understood almost nothing that whole class, but it was so nice to be struggling with my friends again.   – Maria Angelos, 12th grade

It is hard to feel a part of hybrid class when you are on Zoom. I have noticed that in the physical classroom, it looks like more of a community and togetherness, rather than the kids on Zoom, where we are always in a breakout room and nobody talks. It is also hard as far hearing the teacher in the tent, and when the wifi connection freezes. In one of my classes, we got kicked out of the Zoom completely, and the teacher really did not notice and continued with the lesson. By the time we were able to connect back, class was over.   – Kyriana Mason, 9th grade

All comments will be approved by Quill editors. Comments containing inappropriate language will not be approved.
All The Quaker Quill Picks Reader Picks Sort: Newest