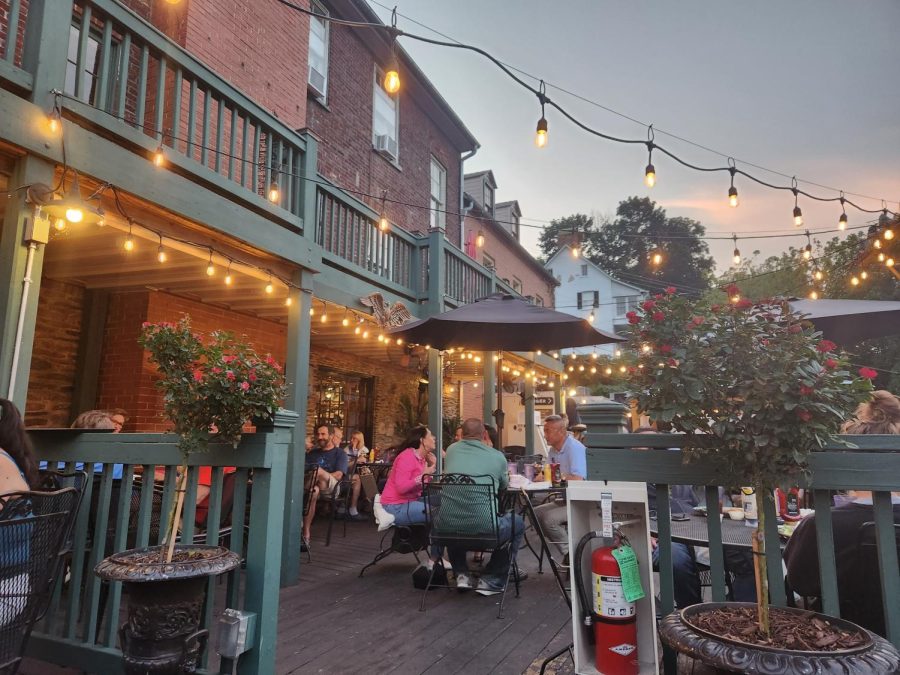 The outdoor patio was lovely; the food was not.

Harpers Ferry-Bound? Hop on Past the Rabbit Hole

Mediocre food and loud passing trains make this restaurant one to skip.

On September 16th, while on a college visiting trip, my family and I went to The Rabbit Hole, a restaurant that opened three years ago in Harpers Ferry.

We had high hopes. That turned out to be a mistake.

The restaurant looked cute from the outside. The inside of The Rabbit Hole was covered in wood, plaques, and signs. It was cozy, but the path to the bathroom was tight and shared with the kitchen, making it hard to get there without bumping into a waiter. We weren’t inside long, however, because we ate on the deck.

The deck had a great view of Harpers Ferry National Historical Park, though a parking lot and set of train tracks separated the two.

Our table was out in the open. I noticed that not all of the tables had umbrellas of the same color, and some didn’t have one at all. The chairs didn’t match, either. Some could rock, while others couldn’t. String lights overhead provided a pleasant glow, and the music playing over the speakers was cheerful.

One side of my menu listed a variety of beverages such as flavored teas and hot apple cider. But when my brother asked for one of the flavored teas, our waitress said the restaurant no longer served them, and hadn’t replaced all of the old menus. My mom’s apple cider tasted like watered down apple juice.

The other side of the menu contained traditional American meals. As I looked it over, I was startled by the loud ringing of a big bell. A man was pulling a rope back and forth so that the clapper hit the bell a few times. I found out later that customers sometimes rang it even thought that was disapproved of.

Sometime after, our pretzel sticks appetizer arrived. They tasted a bit burnt on the outside. The chicken tenders were better, with a good breading-to-chicken ratio. The breading was crispy but not crispy and the chicken inside soft and warm, but the flavor was mediocre. They were good chicken tenders, but average.

The sweet potato fries, on the other hand, were below average. Though their overall taste was good, they left behind a strange aftertaste and were unpleasantly mushy on the inside. I also sampled my mom’s traditional fries. They also had an aftertaste.

As we were eating, a train passed by on the track. It was interesting at first, but the train was very long and loud. Once the train finally passed, another train came by. They interrupted the generally pleasant atmosphere of the restaurant, which was the one thing it had going for it, other than its location.

Harpers Ferry is a town in Jefferson County, West Virginia that Robert Harper settled in 1734. George Washington later bought the area and turned it into an arsenal for rifle manufacturing. In 1859, John Brown raided it in an attempt to make it a stronghold for freed slaves, which contributed to the start of the American Civil War.

But The Rabbit Hole isn’t able to stand on its own without that history behind it. Overall, nothing major went wrong, but multiple minor issues meant I left unsatisfied. You don’t need avoid it if you find yourself in the area, but it’s not worth seeking out.