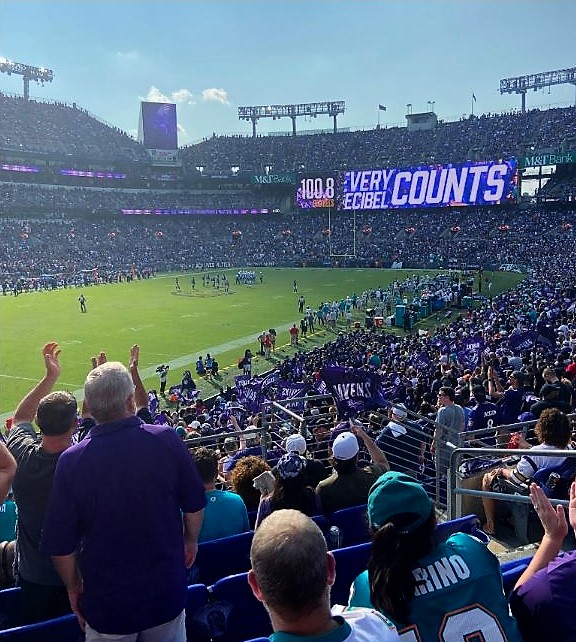 The scene was tense and the crowd excited at the Ravens’ home opener.

Two Quill contributors reported live from the tense standoff between the Ravens and the Miami Dolphins.

A Loss, But No Regrets

The Ravens crushed the Jets in the opening game of the season in New York, and returned to their home field in Baltimore on a warm, beautiful day.

It was the Ravens’ opening game, the first home game of the season. The crowd was animated, everyone flying into the stadium excited to watch the game. I am still as excited as I was walking in, with the crowd cheering and the Star-Spangled Banner in the background. I couldn’t wait for the game to begin.

The two teams lined up in position for the opening kickoff, and the Ravens were receiving. The Dolphins kicked off, and the crowd watched as the ball flew through the air. Devin Duvernay stood in the end zone, caught the ball, and sprinted like a bullet to the Dolphins’ end zone.

He was untouchable. The Dolphins couldn’t seem to keep up with him. He scored the Ravens’ first touchdown in under a minute. The crowd, including me, went crazy. It was an amazing way to start off the game.

It would also turn out to be one of the most exciting moments of this game. After that touchdown, the game seemed too easy. The Ravens were playing amazingly, and kept getting the ball. Everyone thought this was our game.

On defense, Marcus Williams dove onto the ground to intercepts a pass from the Dolphins quarterback, Tua Tagovailoa. The Ravens got possession of the ball and drove it down the field. Another wave of cheers and excitement rolled over the stadium.

Then, the Ravens drove the ball almost for another touchdown, but they fumbled two inches from the end zone. The excitement of the crowd turned to frustration. Instead of a Ravens touchdown, the Dolphins now had the ball.

After that, Ravens quarterback Lamar Jackson took control. He passed as much as he could to help the Ravens keep up the score.

Eventually, Ravens took the lead by 21 points. The crowd was once again flooded with hype energy. Fans were remembering that this was our game; we could smell victory. The Ravens had a 21-point lead going into halftime.

But to start the second half, the Dolphins scored a touchdown. The few fans in turquoise and orange got excited. Ravens fans’ excitement decreased. The Ravens started playing worse after that touchdown, and their poor defensive play continued.

The crowd grew angry, as we were all out of our seats anxiously waiting for this tragedy to end. It felt like the longest 10 minutes ever. The Dolphins’ score kept rising, as our hope for this win was falling.

In the end, it was a sad night in the bank. The Ravens did not take home the win.

The weather stayed beautiful, though, despite the loss in their first game. I am still glad I experienced that exciting game.

Sunday, September 18th was week two of the NFL, with the Baltimore Ravens playing the Miami Dolphins. It was the Ravens’ home opener for the season.

Coming off a high from their week one victory, the Ravens came out of the gates explosive. From the pounds of the drums to the roar of the crowd, the intensity in the stadium was palpable.

For the first time in franchise history, the Ravens returned the opening kickoff for a touchdown. Wide receiver Devin Duvernay took the ball 103 yards for the touchdown giving the Ravens the lead in the first 13 seconds of the game.

The Ravens kept that intensity through the first quarter with an interception by safety Marcus Williams. But that energy was soon lost.

At the beginning of the second quarter, the Ravens had the ball on Miami’s 1-yard line. They ran the ball in for their second touchdown of the day.

But Miami challenged the call. After a lengthy discussion between the officials, the touchdown was overturned. Boos from the crowd shot through the stadium.

After a replay of 4th and 1, the Ravens lost the ball to a turnover on downs. Capitalizing on the momentum, Miami took the ball down for a touchdown.

But the Ravens responded soon after. Quarterback Lamar Jackson threw the ball to wide receiver Rashod Bateman for a 75-yard touchdown.

The ferocity continued through the end of the first half with another interception by Marcus Williams and two more touchdowns by wide receiver Demarcus Robinson and tight end Mark Andrews.

The crowd was ecstatic. Cheers went on for minutes after the end of the half.

Following the halftime show by the historic Baltimore Ravens marching band, the Dolphins set the tone for the third quarter with a touchdown in the first minute. But Jackson took over the game with a 79-yard touchdown run. The third quarter ended with the Ravens up Dolphins 35-14.

Miami opened the fourth quarter with a 4-minute drive resulting in a touchdown. The Ravens tried to respond, but Jackson failed to connect passes to his wide receivers. Baltimore lost the ball on Miami’s 48-yard line after another turnover on downs.

But Ravens fans did not give up hope. They still cheered their voices dead, honoring the Ravens’ unofficial motto: “Every Decibel Counts.”

Entering the game’s last three minutes, the score was tied 35-35. The Ravens’ offense gave it their all at a hopeful make-or-break drive, but Jackson failed again to connect with Bateman in the end zone.

The Ravens had to settle for a 51-yard field goal from kicker Justin Tucker. The Dolphins got the ball on their 25-yard line with less than 2 minutes remaining.

But there was still hope for the Ravens, as multiple offensive penalties called on the Dolphins resulted in a 3rd and long. The Ravens’ famous Captain Dee-Fense, a dedicated fan who has devoted his career to being the Ravens’ defensive hype-man, popped up on the jumbotron to rile the crowd.

But the crowds’ hopes disappeared as the secondary disappointed again, allowing Tagovailoa to connect with Hill for another long pass, and getting the Dolphins to Baltimore’s 14-yard line.

With less than 30 seconds left in the game, Miami scored another touchdown. With 20 seconds left, the Ravens’ offense saw their last opportunity.

But they were not successful. Miami won the hard-fought game 42-38, and Ravens fans left the stadium in a mass of anger and sighs.